A theme that reflects the idea of the presence of man in the environment. How as individuals we are here on earth for a short indeterminate period of time.

The shadow is real but is fleeting and relies on another element, the sun to cast it and allow it to be seen.

The shadow series features a couple walking on the beach collecting objects, taking photographs which are used in or as the starting point for other pieces of art work.

There is an obvious connection, bond between them. There is a feeling of mystery; the paintings reveal there secrets slowly.

We all leave our collective mark on the earth unlike our shadows which disappear into the ether remaining in spirit only.

They have inspired this series.

The sea that features in my work is the East coast.

It continuously changes; weather, time of day, season, light conditions, all change its mood and along with it my response to it.

It holds a sense of wonder and fascination for me, it reflects my inner space and spirit.

I long to see it, hear it, feel it ,taste it when I am away.

Sometimes the beach is sandy, others pebbly, one day littered with the flotsam and jetsam from the sea its natural home: alongside man made objects dispersed by the tide.

It also features the eroding coastline which is at the mercy of the natural forces.

Is the current focus of my work and is based on sketches, photos of the cliff face. These reveal the layers of time which would normally be inaccessible to the eye but underfoot. They show evidence of erosion; by natural forces, by man, by animals that use them as their home and the recent colonisation of plants.

They demonstrate the large array of the colours of sand, earth and captured objects like stones or roots on the cliff face. Also the varying textural qualities and weights of the surface from light crumbling sand to more robust strata of clay and stone.

When the research images I produce are isolated and cropped they display superb abstract qualities; these then become the inspiration for the artwork. 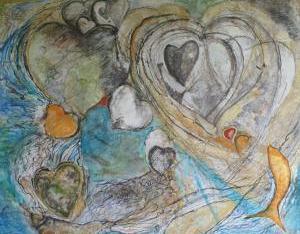